How she started volunteering with RNSO

My mother moved in with my husband and me when she was admitted to hospice care due to end stage dementia and I’m honored to have had that special time with her. There were certainly some good, uplifting times, but there were dark times as well for both of us. One day, a light in the darkness came to us: hospice sent a harp player, Lynn Bledsoe, to visit us. Mother was unable to do anything for herself, but when Lynn played her harp so simply and beautifully, Mother was fully engaged, – she smiled, and even managed a “thank you” or two.  After a few of Lynn’s visits, I asked Mother if she thought I should learn to play the harp so I could play it for her. She surprised us both with a resounding “YES”!  So I rented a harp from Ruth and Naomi and began to teach myself to play. It gave Mother and me another something to do together. Since her death, I have continued to learn to play, and am now taking lessons. I meet with the Ruth and Naomi harp circle and we play at nursing homes and remembrance services.  I do this to honor my mother’s memory, and because it is such a joy to me to know that a little visit by me can mean so much to our elderly orphans and others. They don’t care what or how well I play; it’s the being there that means so much to them.  I also play for hospice patients and their families to help bring their patients relaxation and peace, and to ease their transitions. Please, come join with us and help us reach more of our elderly orphans; there are so many! 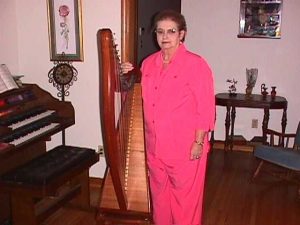 I have volunteered with RNSO for quite a few reasons, #1 being that the founders Mary Porter and Lynn Bledsoe ministered to my sister Hilda Wilson (who was also a student of the harp) as she was dying and to our family in loving and caring ways.  Playing the harp for us was a bonus. Mary Porter also played for my brother Buddy Wilson when he was terminally ill two years ago.  I became active in the group [harp circle] following my sister’s death to give back some of the loving care that was shown to us.  I continue in my now very limited involvement because I consider the work of all the dedicated harpists to other patients and families to be a very important supportive role in those who are terminally ill.

On a different note, my sister (mentioned above) first met Lynn and Mary when they played at a senior event at her church.  Hilda talked with Lynn and Mary about learning to play the harp and upon returning home Hilda called me to come to her house.  When I arrived Hilda told me about the meeting and then said she wanted to learn the harp and she wanted me to learn with her.  This was in 2003 and I was 61 years old and retired on disability; my sister was 12 years older.  I immediately balked stating that I had no desire to learn this late in life to play an instrument. Finally I agreed to go with Hilda to visit the teacher Cynthia Lynn Douglass.  End of story is that once I heard Cynthia play, I too fell in love with the harp, took lessons and eventually after above events volunteered with RNSO.